After the successful start in 2021, the Sportland NRW Cup will take place for the second time as part of the 49th International Dortmund Chess Days. A mixture of strong youth players and top-class title holders promises an exciting round-robin tournament.

The tournament features the winner of the German U16 Championship, the two-time German U18 runner-up, the 2018 NRW Champion and three squad players of the German Chess Federation. In addition, a grandmaster living in Dortmund, two strong International Masters and one of the best U12 chess players in the world!

We introduce all the participants: 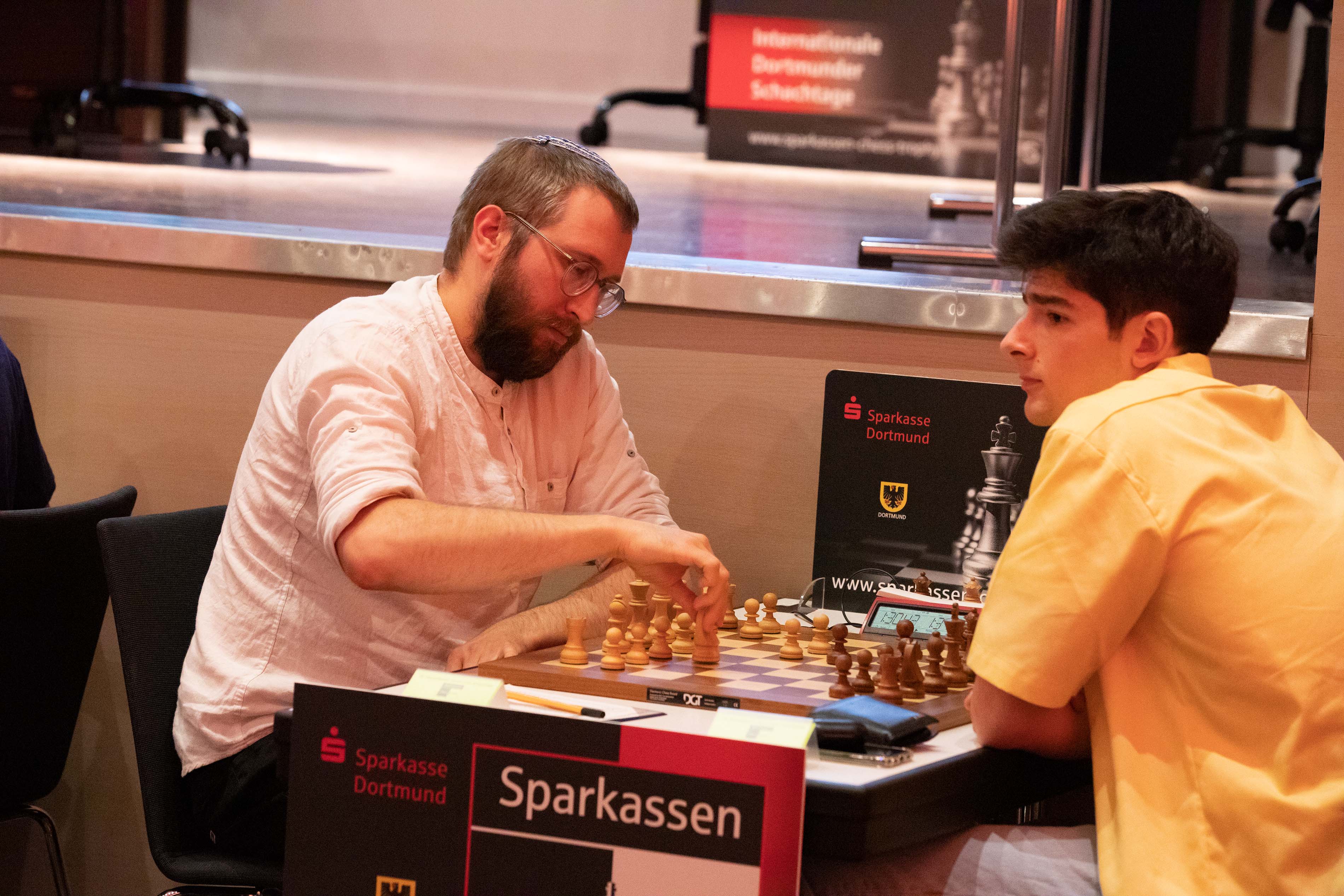 Last year Alexander played his way into the limelight in the No Castling Sparkassen Online Open and won the second preliminary round (report). The grandmaster, who lives in Dortmund, was then a guest at the Westfalenhallen Congress Centre and played the final from there, where he then missed the podium.

In 2022 he is now the top seeded player in the Sportland NRW Cup. Alexander comes from the Ukraine, then immigrated to Israel and now lives in Dortmund. He has been playing chess since he was 6 years old and has already won prizes in many national and international tournaments.

He considers the 2018 Jerusalem Championship to be his greatest success, where he won all his games against good opponents.

The Dutchman turns 20 shortly before the start of the tournament and has already been International Master since 2018. He is not only a very active player in the Netherlands, but also regularly travels to Germany, as he plays for SV Mülheim-Nord in the Bundesliga.

With the well-known German International Master it is the other way round than with Liam: Jonathan has already fulfilled the required three Grandmaster norms, but has not yet cracked the 2500 Elo. He considers his best results to be the shared first place in the xtracon Cup 2018 and his result with GM norm in Gibraltar 2017, where he was drawn down against GM Vasily Ivanchuk in the last round. In Dortmund, his goal is of course to make it as difficult as possible for the "norm chasers". In 2010 Jonathan already played in the A-Open of the International Dortmund Chess Days and fondly remembers his draw against Matthias Blübaum, as well as the cosy afternoons with his father in the spectator area of the grandmaster tournament.

Tom was also born in 2002 and is Irish by birth. In 2020 he won the Irish Championship with 7 out of 9. As a 14-year-old he became the youngest ever Fidemaster from Ireland and is now attacking the IM title. Things have been going well for him recently: he passed 2400 and now stands at an Elo of 2401, and with a strong tournament he earned an IM norm in the 2022 European Individual Championship. Tom wants to build on that in Dortmund. 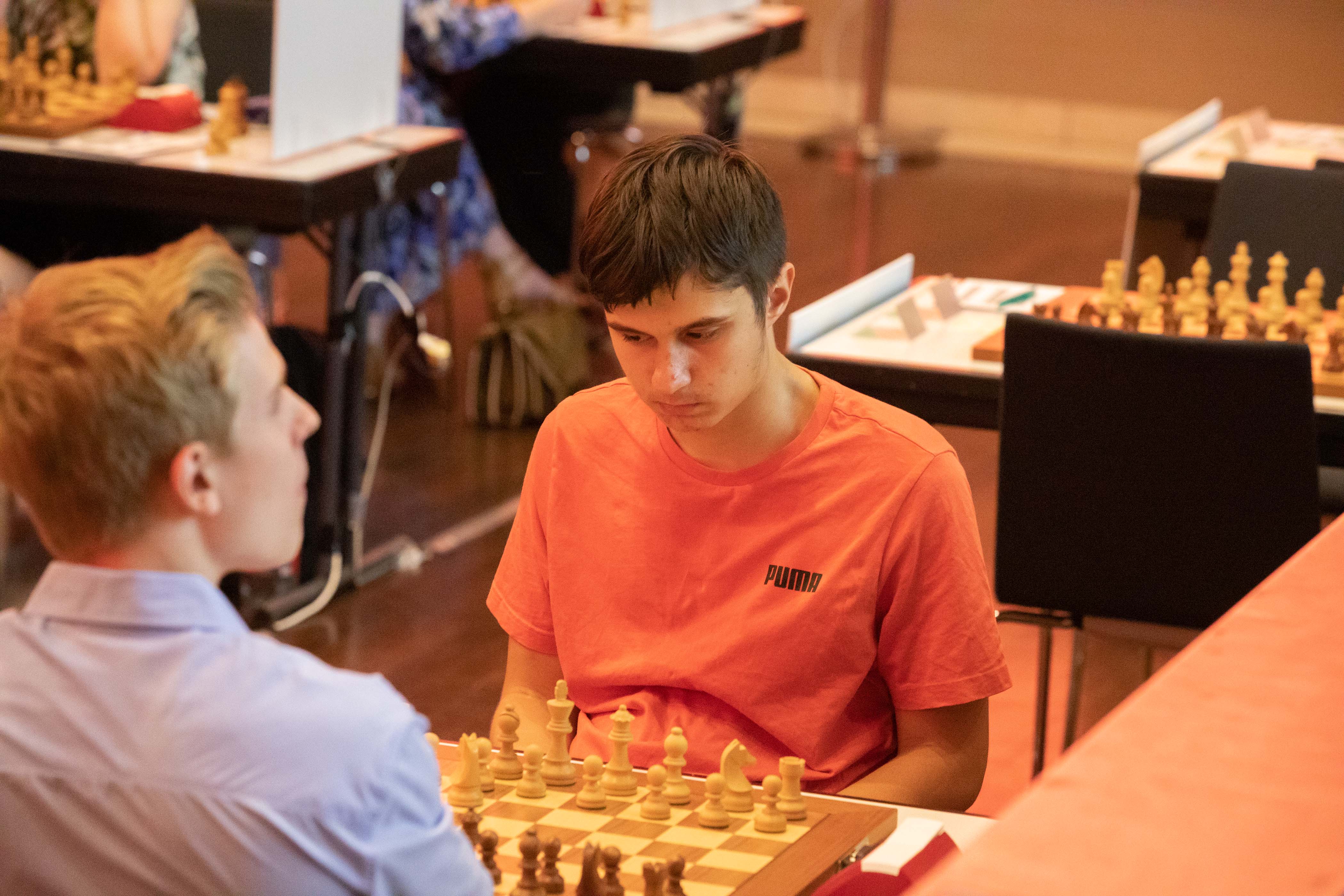 Artem plays under the Ukrainian flag but lives in Germany and plays for the SF Bad Emstal/Wolfhagen. He is a newly crowned winner of the German championship, as Artem won the German U16 championship in June!

He has already achieved very good results in various youth tournaments: 2nd place European Championship U16 2021, 2nd place Ukrainian Championship U18 2020, winner Ukrainian Rapid Chess Championship U18 2021. So far he has been able to earn an IM norm and after the latest success he stands at 2392 Elo. So his goal is to achieve the second norm in the Sparkassen Chess Trophy. He is particularly looking forward to Dortmund because of the history and playing alongside the two World Champions Vladimir Kramnik and Viswanathan Anand.

Richard is one of the strongest young German players and already has an Elo rating of 2381 as a Fidemaster. He was born in 2005 and is playing the International Dortmund Chess Days for the first time. He has been a squad player of the German Chess Federation for several years and has already played in youth national teams.

Christoph is also one of the most successful German youth players. He is a two-time German Vice-Champion U18, in 2021 and 2022 he finished second. In Saxony he won the Youth Championship three times, and he also won the German Internet Amateur Championship in 2020.

For the International Dortmund Chess Days, Christoph is aiming for a good tournament, preferably with an IM norm. He has a connection to Dortmund, as his grandfather was born there. 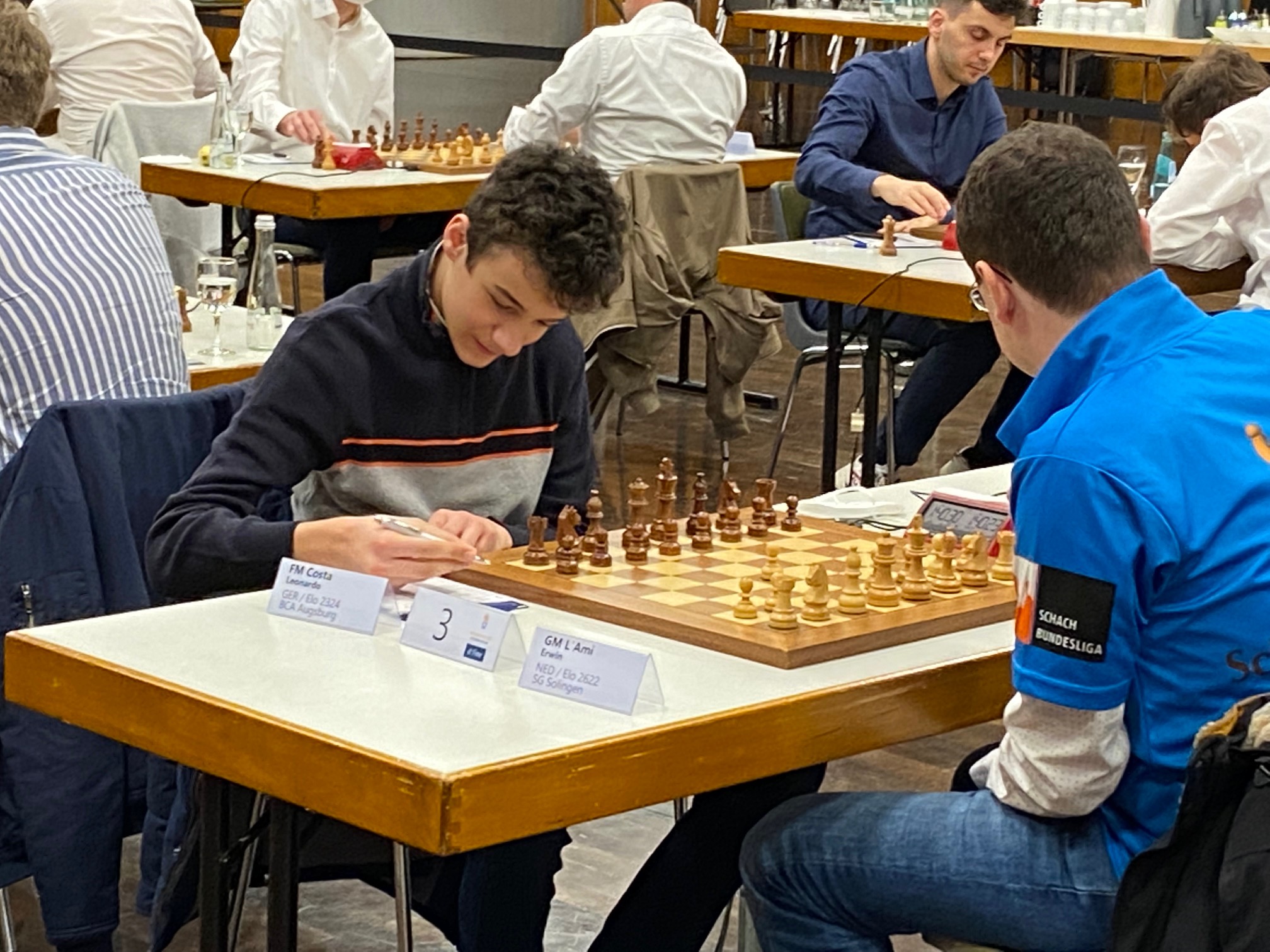 Leonardo is already a two-time German Youth Champion, U10 and U14, and was only born in 2008. Since this season he has been playing in the first national chess league for Augsburg and has already played 10 games at the highest level, for example against Erwin L'Ami (photo), the top seed in the Sparkassen Open A. He is also aiming for an IM norm. Leonardo's highest rating was already 2393.

He has not yet been to Dortmund, but as a football fan Borussia Dortmund is his favourite team. He is not only looking forward to the tournament and the city, but also to the many great chess players at the Sparkassen Chess Trophy 2022.

Sauat is from Kazakhstan and only 11 years old, but he not only already has an Elo rating of 2201, but also great experience for his age. He is one of the top 10 chess players under the age of 12 in the world and has been playing chess since he was 5 years old. Since he was 7, Sauat has successfully played in international tournaments. For example, in Germany he was at the Grenke Open 2019, where he won the first prize under 14.

In Dortmund, Sauat wants to further improve his rating and if possible play for his first IM norm. His little brother will travel with him and support him. 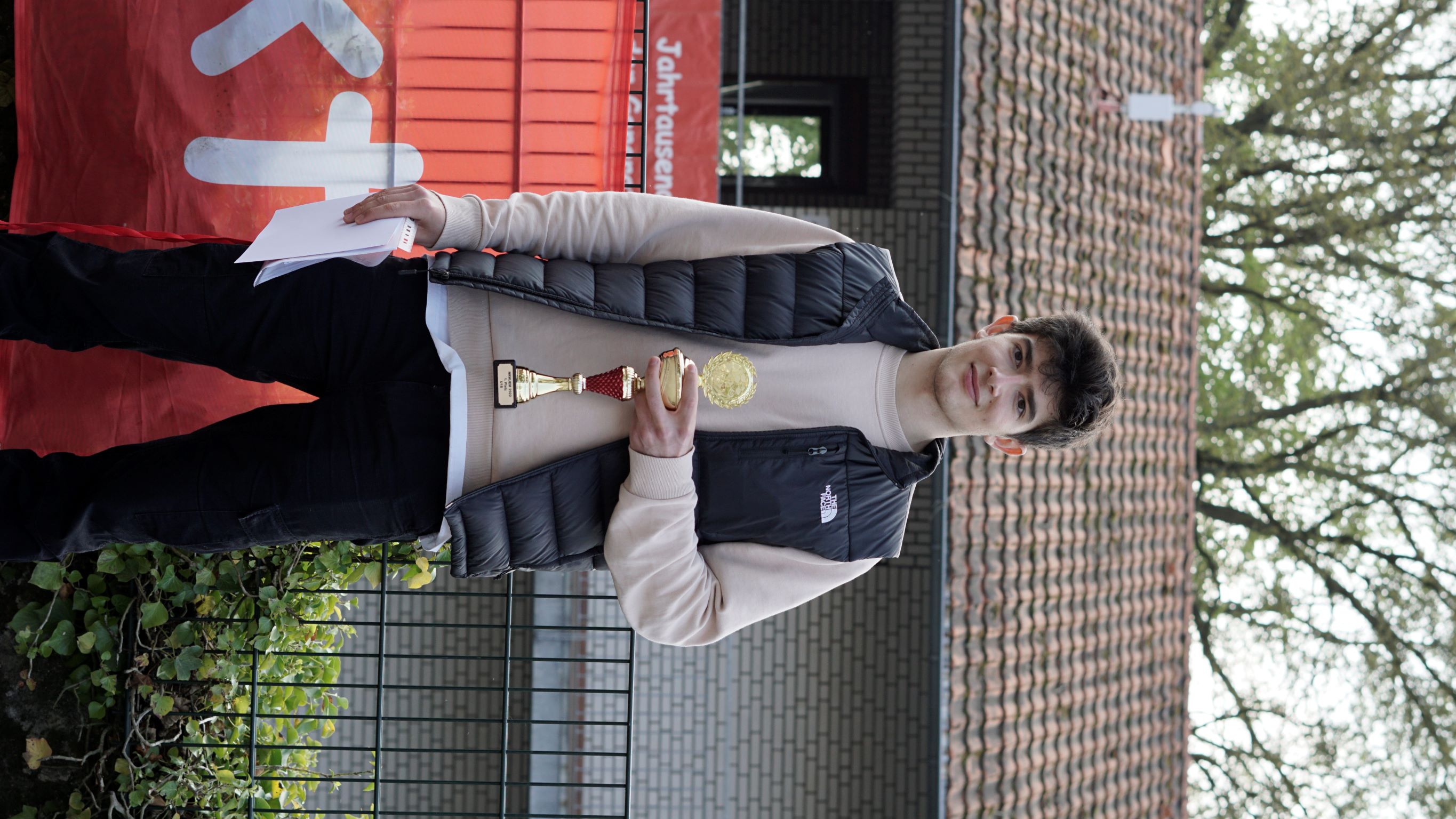 He is the local hero and has had a very successful year so far: Timo won the NRW Championships U18 this year and subsequently came seventh at the German Championships U18. He plays for SV Hemer in the first team and the successful youth team and, as a first-rounder, naturally wants to cause a few surprises in the field of participants.

A 9-round round robin tournament will be played, the pairings are fixed:
Pairings

The average rating of the participants is 2351, so that the IM norm mentioned by many participants is attainable. The winner of last year's Sportland NRW Cup, Ruben Gideon Köllner, is now International Champion with the help of last year's victory. This year, the youth players will again have the opportunity to use the International Dortmund Chess Days as a milestone for their further chess career.

The tournament starts on Saturday, 16 July at 3 pm, and one tournament game will be played every day until Sunday, 24 July. All games will be broadcast live. A Sportland NRW Women's Cup will be held at the same time. Information on this round-robin tournament will follow shortly.